For one week only, get The Opium of the People by J Alan Erwine for 50% off from DriveThruFiction at https://www.drivethrufiction.com/product/65438

After a near-miss of a giant comet, the American people fall under the control of a radical right-wing fundamentalist Christian government, ruled by the Grand Patriarchs, that slowly strips away their freedoms and establishes a rule of law that even the dictatorships of the 20th Century couldn’t have dreamed up.

Forced into virtual seclusion, Edward Silverberg, a former English Lit professor, finds himself on a path that will lead to either his destruction, or the destruction of the Grand Patriarchs…or maybe both. 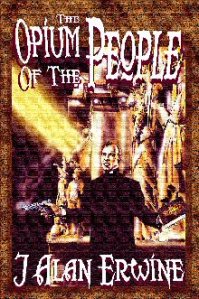